FOR THIS PROJECT I WAS INVOLVED WITH

Restorers and Conservators of Gilding and Woodcarving 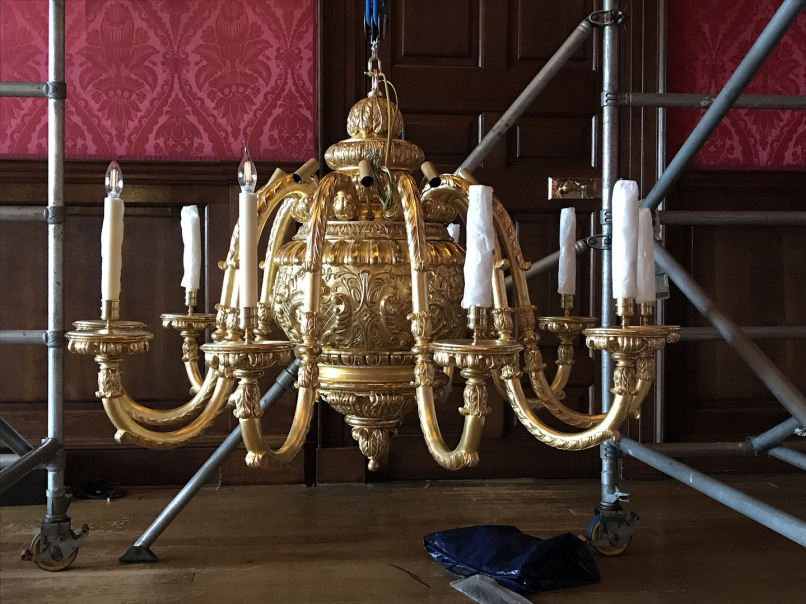 In 2016 Ray Dudman of W.Thomas Restorations was approached by Historic Palaces to make a prototype wooden chandelier for the King's Drawing Room in Kensington Palace.  The originals had long since disappeared.

This was a very complicated project which could not have have been undertaken without his years of specialist knowledge of design, carving and gilding.  Then the turning and electrics and various other different trades.

I consider myself lucky to have known and previously turned work for Ray to assist with this project.

He drew up plans from a very small 1819 illustration and entered into consultation with the relevant committee.

Making the prototype was a slow process, taking well over a year, involving many changes to the early preliminary design.

I am very delighted to have been involved in this projection, however the real credit goes to Ray and his team of carvers and gilders.

When the prototype was finally presented and authorised the job of making 4 chandeliers was put out to tender.

The difficulty of the project now becomes apparent as other that Ray, there were NO other tenders proferred.

So Ray got the commission.

This meant that I got the job of turning up the blanks for the carving the 30 - 40 round, pieces in each Chandelier.

The chandeliers were eventually hung in January 2020.

The following pictures show various stages of my turning.

The carving and gilding was done by Ray.

This long process required experimentation, for him see what looked right.

Back to PROJECTS
Or  -  Back to HOME